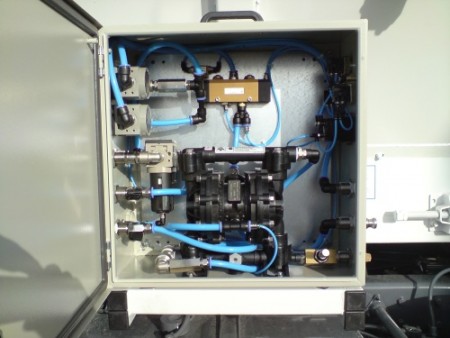 Triark Pumps, a UK supplier of air-operated double diaphragm (AODD) pumps, has been shortlisted in two categories within the prestigious Pump Industry Awards for 2017.

The company has been nominated as a possible recipient of the Distributor of the Year and the Technical Innovation of the Year – Projects awards.

Commenting on Triark’s selection as a finalist, MD David Rozée said: “Recognition by the PIA judging panel for our pump distribution credentials, for the second year running, is testament to the skill and effort expended by the Triark team every day, and is a wonderful achievement. But to have also been recognised for one of our ‘engineered solutions’ is nothing short of fantastic.

“These days, we’re often presented with small yet challenging applications, but this project was particularly interesting. We were approached by a national concrete supply company, who had been tasked to fill and make safe a large hole that had appeared in a landfill site. The challenge was to significantly reduce the weight of the concrete used, so as avoid further subsidence, whilst facilitating an effective pour at what was a relatively remote location,” he added.

By using an AODD pump at its heart, Triark’s engineers developed a pneumatic “foam generator” that was able to produce the same sort of foam that Celcon use in the factory production of its industry standard building blocks, but in a more liquid form to enable onsite mixing and pouring of lightweight foamed concrete.

The foam generator was attached to the side of the cement mixer, allowing use of its on-board compressor and water tanks.

In operation, appropriate volumes of water and foaming agent are drawn separately into the integral AODD pump, which mixes them in the correct ratio to produce the pre-foaming solution.

The solution is then forced at high pressure through a lance to produce foam that has a volume 20-25 times that of the pre-foamed solution.

The foam is mixed into the mortar slurry to make the lightweight foamed concrete, which is then used to fill and cap the sink hole.

Not only did this approach help solve the challenge of filling and stabilising the large cavity, the solution also delivered significant weight and cost savings over traditional concrete pours.