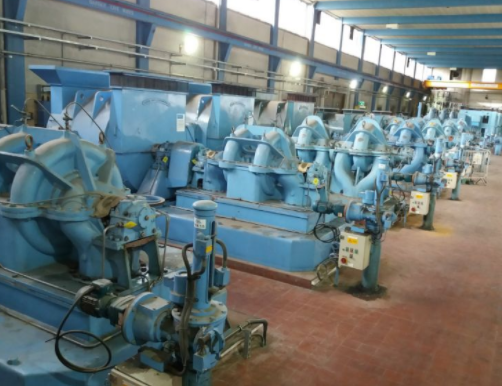 The pumps at the treatment works
United Utilities has been testing and replacing some equipment at one of its biggest water treatment works in the UK.
The work is being carried out at the Huntington water treatment works in Cheshire where the water company was busy replacing old pumps and motors while keeping the site running and the taps flowing for its customers in the north-west.
The pumps were being replaced with Siemens Motors and Perfect Harmony MV VSDs.
The company is also carrying out the biggest ever revamp of Carlisle’s water mains as it moves into its penultimate phase as engineers drill six metres below the River Eden.
The work is part of a three-year scheme by United Utilities to clean and re-furbish more than 30km of the city’s biggest water pipes.
This latest phase of work involves re-lining 3.8km of old cast iron water pipe which skirts the northern outskirts of Carlisle. It will start in former school grounds near Victoria Place and end at Newfield Drive, off Kingstown Road, in the middle of February next year.
To avoid potential ecological damage to the banks of the River Eden, United Utilities decided to replace one short section of old pipe with a brand new piece made of durable polyethylene. This involved drilling six metres underneath the river bed and was one of the first pieces of work to be completed.

The pumps at the treatment works