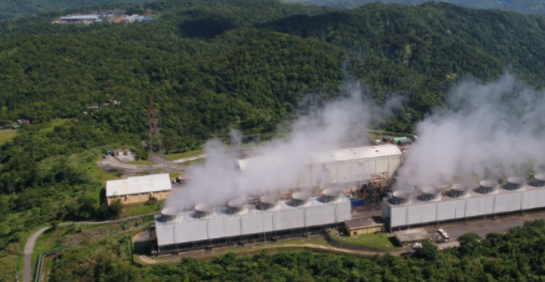 An aerial view of the site
Turboden has been selected as the supplier of a 29 MWe geothermal power plant to be installed in the Philippines.
The Mitsubishi Heavy Industries (MHI) group company will build the facility at the Energy Development Corporation’s (EDC) Palayan Bayan expansion project. The plant is to be built at the Bacon-Manito geothermal facility located in Luzon Island, Philippines.
EDC, the world’s largest vertically integrated geothermal company with over 40 years of expertise, has signed a contract with Turboden to supply a new class binary power generation system to recover heat from a brine flow downstream of an existing flash plant.
The project is expected to be operational by the end of next year and is part of overall efforts to reduce CO2 emissions from thermal power generation by replacing the local grid's dependence on fossil fuels and other energy sources.
In the Philippines, where the demand for electricity is expanding in line with its GDP growth, the introduction of renewable energy is actively promoted.
“We are very proud of this new project with a leading clean energy developer such as EDC. The new binary geothermal power generation using ORC technology in this project does not require additional drilling and can generate power by utilizing waste heat water from existing geothermal power plants. This brine recovery solution is highly replicable in many existing high enthalpy geothermal plants both in the Philippines and worldwide,” said Paolo Bertuzzi, CEO Turboden.
The 29 MWe-class binary power plant is expected to reduce CO2 emissions by approximately 72,200 tons per year (equal to the C02 absorption of a forest area of 4.7 times the area of the City of Manila.

An aerial view of the site