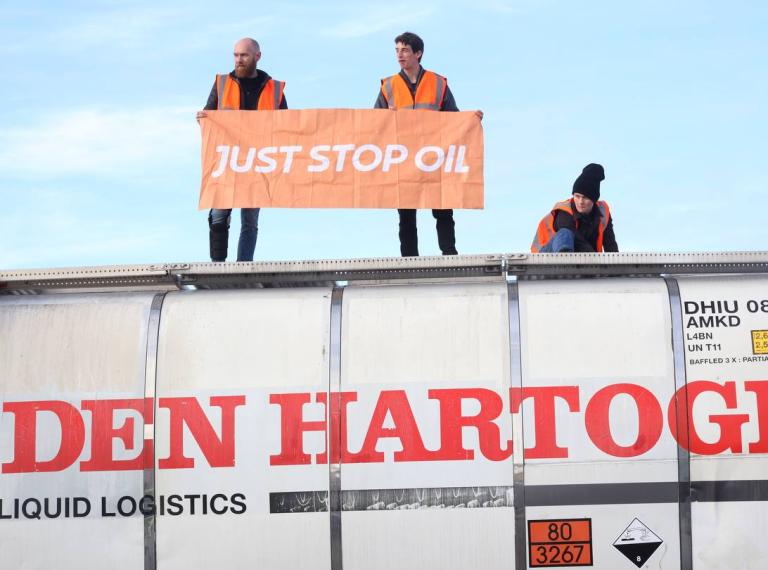 Protesters have been blockading fuel distribution terminals across the UK over the past fortnight as reports of shortages at petrol station forecourts have begun to spread as fuel deliveries are hit.
Supporters of the Just Stop Oil campaign have taken action at 11 different fuel terminals in England since the start of the month, blockading and trespassing on sites to stop tankers entering, filling up or leaving to deliver fuel. Refineries in Birmingham, London and Southampton have been targeted.
Petrol retailers said that the protests are not having a serious impact on deliveries. However, there have been dozens of local reports of petrol pumps running dry and Priti Patel, the home secretary, said “people across the country [were] seeing their lives brought to a standstill” by disruption caused by the campaign.
The protesters have vowed to continue taking action until the government agrees on a ban on all new fossil fuel projects. Several protesters have chained themselves to pipework at Inter Terminal in Grays, Essex, the third largest terminal in the country.
“We’re doing this because our government is refusing to act on the climate crisis and we need to have a meaningful statement that we will have no new fossil fuel projects, it’s that simple,” said an activist, who gave his name as Nathan, in a video filmed from above the loading bay at the terminal and published on Twitter.
Responding to the protests on Monday, a No 10 spokeswoman said: “We recognise the strength of feeling and the right to protest is a cornerstone of our democracy, but we won’t tolerate guerrilla tactics that obstruct people going about their day-to-day business.”
She added: “We fully support the police who are putting significant resource into their response to the demonstrations.”