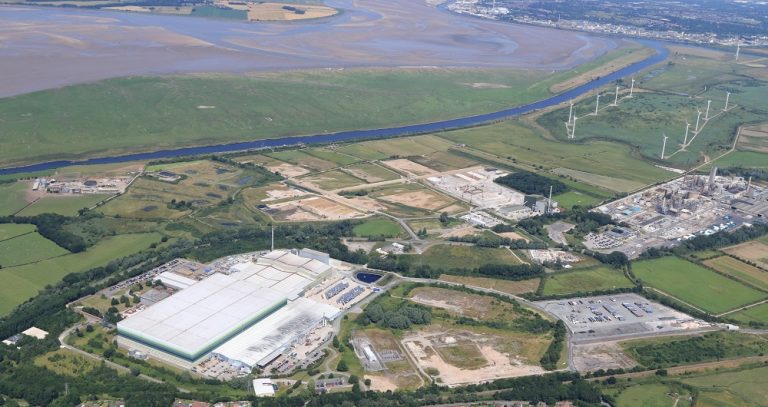 Plans to create a CO2 network at Protos to capture some 800,000 tonnes of carbon emissions have been revealed.
Peel NRE, part of Peel L&P, has revealed its vision for a network of CO2 pipelines at Protos, the strategic energy and resource destination near Ellesmere Port.
The Protos CO2 network would connect to the regional CO2 pipeline, being developed as part of HyNet North West.
It is part of a cohesive plan for the North West to become one of the first regions to deliver a carbon capture cluster and reach net zero – by storing greenhouse gases in offshore depleted gas fields beneath Liverpool Bay.
It follows the Government selecting the North West as a Track 1 Carbon Capture, Usage and Storage (CCUS) cluster to begin decarbonising industry with the backing of a £1 billion (€1.12 billion) infrastructure fund.
The Protos network, which could be operational by 2025, will be initially concentrated on energy generators at Protos, with scope to expand to capture emissions from additional generators and businesses in the industrial corridor between Ellesmere Port and Runcorn and beyond.
The project would capture some 800,000 tonnes of carbon dioxide a year– with future phases increasing capacity to over 1.2 million tonnes.
Jane Gaston, Protos development director at Peel NRE, part of Peel L&P, said: “Protos has been a real draw for energy generators and innovators. Our vision has always been to underpin the circular economy – making the best use of our resources to power the region. In turn, we’ve unlocked hundreds of millions of pounds of investment into the North West. The CO2 network is the next major step on our journey to create a destination for low carbon energy and support the transition to net zero.”
Protos is currently home to Bioenergy Infrastructure Group’s 21.5MW operational biomass facility, with construction underway at Covanta’s 49MW Energy Recovery Facility. Further planned facilities including the UK’s first Plastic-to-Hydrogen facility, using Powerhouse Energy technology, and Protos Biofuels Ltd’s waste-based BioSNG plant.