Work to overhaul Keadby pumping station in the UK has taken a significant step forward thanks to the arrival on site of the first two of six new pumps.
It is all part of a £35 million (€40 million) investment to upgrade the 80-year-old pumping station near Scunthorpe, which will bring both flood-risk and environmental benefits to the Isle of Axholme area which takes in some 500km of North Lincolnshire, South Yorkshire and North Nottinghamshire.
The two pumps were tested in Holland before they were shipped to the UK. Together, they have the combined power to fill an Olympic swimming pool in about five minutes.
They have now arrived at Keadby as work on the project continues with contractors and staff from the Environment Agency following recent Public Health England safe working advice. 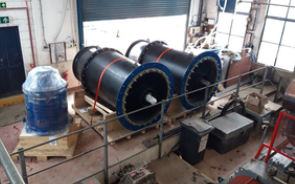 A spokesperson for the Environment Agency said: “The first two pumps will be installed over the next two months. The remaining four pumps will be delivered and installed before the end of the year.
“After the pumps are installed we will be able to finish refurbishing the pumping station and re-constructing the outfall to the River Trent.
“Throughout the work we will continue to operate the pumping station to manage flood risk and water levels. The work is on schedule and the new pumps will be operational in early 2021, with the rest of the refurbishment complete by the end of 2021.”
This project is part of the Environment Agency’s £140 million (€158 million) asset repair programme for 2020. Work on the projects continue where it is safe for the teams and delivery partners to do so.
The current station has reached the end of its working life because the pumps and the equipment are unreliable, costly to maintain and are increasingly at risk of breaking down. However, they will be maintained and will be fully operational until the station update is complete.
The scheme also includes the construction of new electrical equipment buildings within the existing site and rebuilding of the outfall headwall.
The contract was awarded to GBV, a joint venture between Galliford Try and Black & Veatch.
Each pump weighs around 10 tonnes. They have been delivered by Pentair Fairbanks Nijhuis pumps as part of GBV’s scope of supply.
The new pumps are also ‘fish-friendly’ and will allow safe navigation for fish and eels on their natural migration.