Fatberg the size of a house removed from UK network 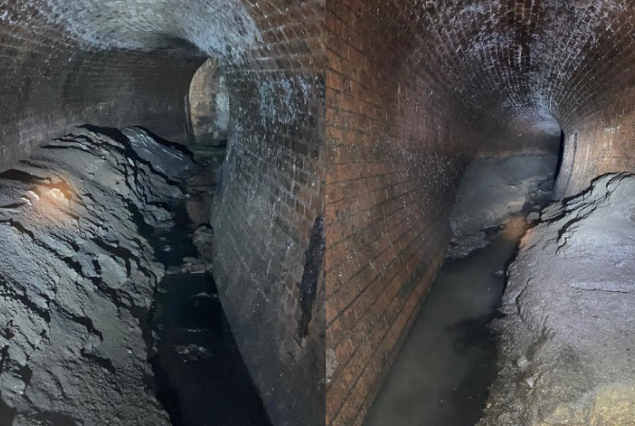 A huge fatberg weighing the same as a small bungalow has been hacked clear from a Canary Wharf sewer by a team of Thames Water engineers.
An underground crew spent two weeks working with partners MTS Cleansing Services battling the blockage, which had been quietly growing underneath London, and was clogging up long sections of the six-foot wide sewer.
If it had been allowed to grow any bigger, the blockage could have led to sewage spilling out into homes, businesses and the environment.
The engineers used a combination of high-powered water jets and hand tools to chip away at the solidified debris, fed full of fatty residue and unflushable items.
The team also had to manoeuvre their way through a small side entry to get access to the main sewer, deep under London’s famous business district.
Matt Rimmer, Thames Water’s head of waste networks, said: “This was a huge, disgusting fatberg that took a great deal of brute force and teamwork to clear. It was set hard and had to be destroyed piece-by-piece to get the sewer flowing properly again.
“Our brilliant engineers were able to clear the huge blockage before it caused serious problems, negotiating tricky and cramped working conditions along the way.
“We’re urging everyone to be especially careful what they flush down their toilets. Many items like wet wipes have plastic in them and won’t break down in the sewers, even if they say they’re flushable.”
MTS Cleansing Services are drainage and waste management specialists who have worked as a key contractor to Thames Water since 2001.