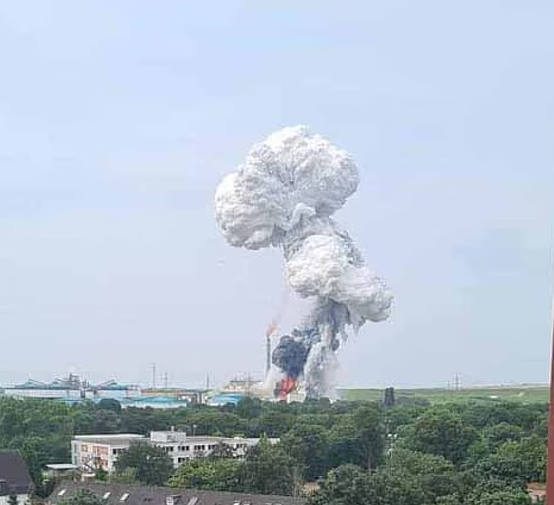 @Deichkind65
An explosion at a chemical park on July 27 shook the western German city of Leverkusen injuring several employees and sending a large black cloud rising into the sky.
The explosion happened at around 9.40am on Tuesday in a part of the site where waste is incinerated, a statement from the operators of the Chempark site said.
It has been reported several employees were injured in the blast, at least two of them seriously, and five employees are currently missing.
The cause of the explosion and subsequent fire is being investigated by the emergency services.
Germany's Federal Office for Civil Protection and Disaster Assistance classified the explosion as 'an extreme threat' and residents were being urged to stay indoors and keep windows and doors closed, the German news agency dpa reported.
Firefighters and pollution detection vans were deployed to the site and the injured have been taken to hospital.
A spokesperson for Currenta has revealed it is in the process of preparing a press conference for an update.
German police added that it was not yet clear how much damage was caused and that a large number of emergency staff were on site. Several nearby motorways have also been closed.
More than 30 companies operate at the Chempark site in Leverkusen, including Covestro, Bayer, Lanxess and Arlanxeo, according to its website.
The site lies about 20 kilometers (13 miles) north of Cologne on the Rhine river.