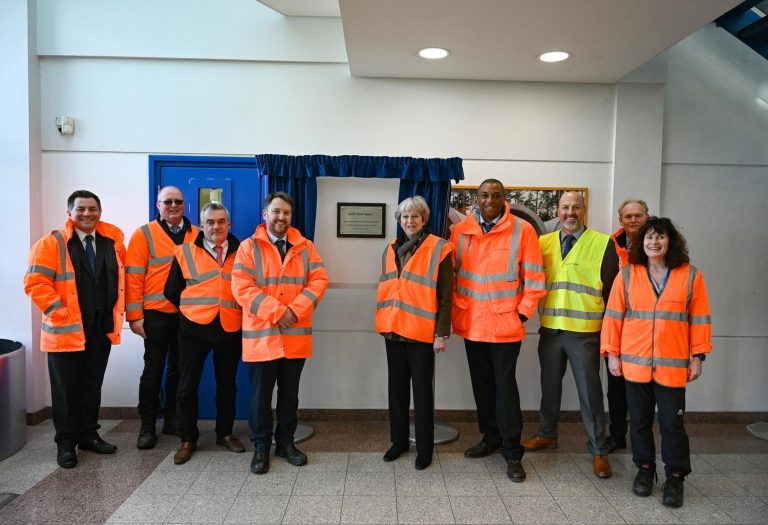 Former Prime Minister Theresa May helped open a new station capable of pumping up to 68 million litres of water a day - a 50% capacity increase and enough to fill 27 Olympic-sized swimming pools.
South East Water pumped more than £25 million (€29 million) into the expansion at Bray, which supplies top-quality drinking water to Berkshire as well as homes in Hampshire and Surrey.
Theresa May MP said: “I was pleased to be asked to unveil the new treatment site which is clearly a very important resource for the community.
“Water is something which many of us take for granted but producing safe drinking water is a very complicated process.
“I’m pleased South East Water has delivered this vital project which will continue to supply the area with water for many years to come.”
Bray Keleher treatment works first opened in 1996 with the vision the site would need to be expanded as the community grew. It was initially capable of pumping up to 45 million litres of water a day to customer taps.
Construction on the expansion started in 2018 and involved clearing out thousands of tonnes of earth before installing a series of gigantic tanks.
They include a new Rapid Gravity Filter unit, which uses sand to remove pesticides from raw water and a brand-new sludge treatment system.
The largest tank, a Granular Activated Carbon tank, can hold up to approximately 500,000 litres of water at a time and uses carbon to remove unwanted odours.
Mrs May unveiled a commemorative plaque to mark the completion of the project, in similar fashion to former MP John Gummer when the site was first built in 25 years ago.
Desmond Brown, head of engineering at South East Water, added: “We have invested a significant amount into expanding our treatment works, highlighting our dedication to ensuring we continue to supply the community with top-quality drinking water as the population grows.
“Our team faced many challenges along the way – particularly with the COVID-19 pandemic – so I am delighted the expansion is now up and running and already pumping water to your taps.”