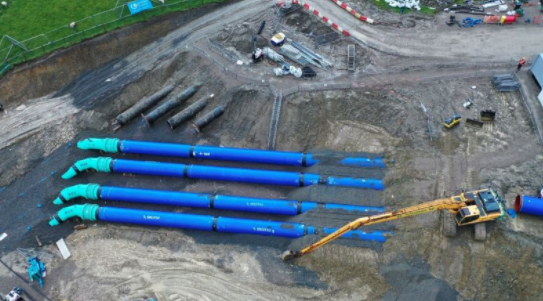 The work in progress
A team of 180 specialist engineers have pulled off the biggest plumbing job in the north-west UK despite severe storms and the effects of the COVID pandemic.
United Utilities connected four new 1.6 metre diameter pipes into the Haweswater Aqueduct, near Kendal, in under eight days.
Connecting the new section meant shutting down the aqueduct for the shortest period possible and marked its first major repairs in 65 years since it was built.
Project director John Hilton said every hour of every day had been planned in meticulous detail.
He said: “This is only the third time in its life that the aqueduct has ever been drained and I’ve been there every time. You’d think it would get easier, but it doesn’t. This time we were working during a pandemic and we had biblical rain like you wouldn’t believe.”
After nearly two years constructing the new 2.5 km section of pipe, United Utilities handed the entire site to framework contractor Mott Macdonald Bentley to complete the connections.
At its peak 90 engineers on round-the-clock socially-distanced shifts were working at either end.
In the final hours, storms were so fierce that large steel huts erected to shelter welding activities were left in place to provide weather protection for the remaining work.
He added: “The other big issue we faced was COVID. As well as rigorous round-the-clock cleaning, team distancing and testing, almost 100 extra trained staff had to be put on stand-by in case an entire work team had to self-isolate.”
A dedicated team of cleaners worked 24 hours at each end of the pipe constantly disinfecting equipment and work areas.
Project sponsor Martin Padley added: “Despite the weather, this is the best time of year because there’s plenty of water available from other sources.
“The main thing is that we have safeguarded a major essential piece of our regional water network for future generations and none of our customers were any the wiser. It takes careful planning, and round the clock vigilance by our teams across the region, to keep everyone’s taps flowing.”
While the pipeline was out of operation, another team of engineers took the opportunity to enter the Haweswater Aqueduct further south to carry out more inspection work.
The impressive feat of engineering completed at Hallbank is the first milestone in a much bigger project, which will see the replacement of six more tunnel sections along the 109 km Haweswater Aqueduct which supplies drinking water to 2.5 million customers in Cumbria, Lancashire and Greater Manchester.

The work in progress