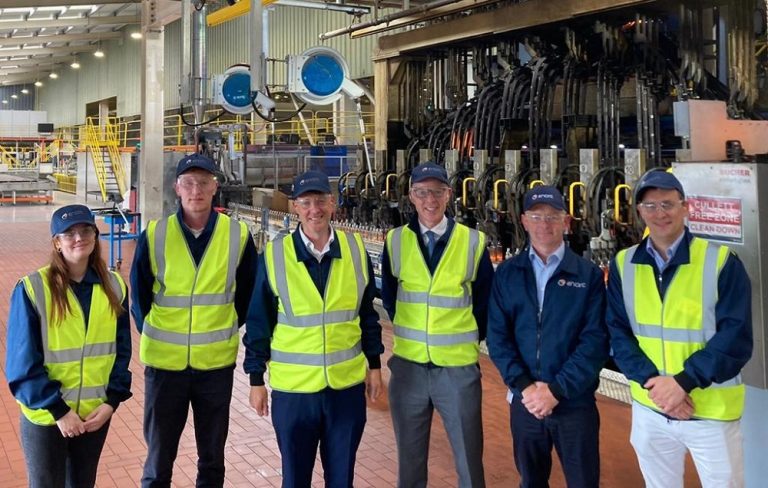 Former Energy and Climate Change Minister Chris Skidmore MP, who has been appointed by Liz Truss to lead a review of net-zero, visited HyNet - the UK’s leading industrial decarbonisation cluster.

Skidmore, chair of the Environment All-Party Parliamentary Group, began his tour of the UK with HyNet as the first stop.

HyNet is at the centre of the UK’s low carbon hydrogen economy and will reduce carbon dioxide emissions by 10 million tonnes every year by 2030 – the equivalent of taking four million cars off the road.
HyNet’s infrastructure will produce and store low carbon hydrogen to fuel industry, generate power when the wind isn’t blowing as well as fuelling heavy transport and enabling low carbon heating of homes and businesses.
In addition, HyNet will provide the infrastructure to lock away carbon dioxide emissions from heavy industry.
The party stopped at HyNet partners INOVYN and Encirc.  INOVYN is developing HyNet’s hydrogen storage which will equate to over 10% of the UK’s current gas storage – supporting the UK’s energy security.
The tour then moved to Encirc, the largest container glass manufacturer in Europe, who will be using HyNet’s low carbon hydrogen to decarbonise and expand their manufacturing processes, creating 200 new roles whilst safeguarding around 1000 jobs.
David Parkin, project director of HyNet said: “We are delighted to host Chris as he begins his net-zero UK tour.  Industry contributes to approximately a fifth of all the UK’s carbon emissions and, in order to hit net zero, we must take rapid action.
“Today we visited to just two of HyNet partners.  We are working with over 30 major companies which access the North West industrial heartland, to slash their carbon emissions, safeguard jobs and catalyse economic growth.”
Skidmore MP added: “HyNet will make a substantial impact on the UK’s drive to reach net zero.  The project is a great example of how we can generate jobs and attract investment through net zero growth.
“Government must engage with hard-to-decarbonise sectors, supporting them to operate sustainably, both protecting the UK’s vital manufacturing base whilst, at the same time, enabling them to produce the low carbon products consumers are demanding. Net-zero growth will allow our economy to thrive, whilst protecting our planet.”