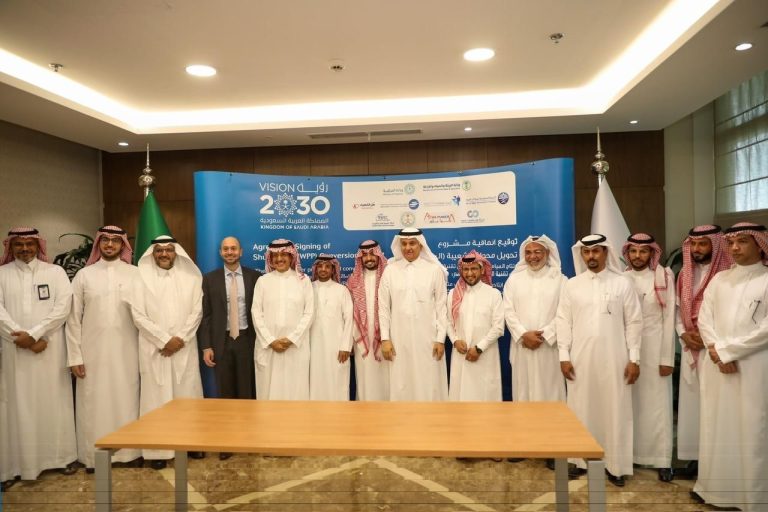 ACWA Power has signed an agreement to restructure the Shuaibah 3 Independent Water and Power Project (IWPP).
The Saudi firm is a developer, investor and operator of power generation, desalinated water and green hydrogen plants worldwide, Shuaibah Water Electricity Company (SWEC), and Saudi Water Partnership Company (SWPC), the off-taker of Shuaibah 3 IWPP.
The agreement entails the conversion and replacement of the IWPP from an energy-intensive power generation and thermal desalination facility to a greenfield seawater reverse osmosis (SWRO) desalination plant under the name Shuaibah 3 Independent Water Project (IWP).
As such, operations of Shuaibah 3 Independent Water and Power Project (IWPP) will cease in 2025, saving nearly 45 million tons of carbon dioxide emissions and 22 million barrels of light crude oil annually.
Abdulrahman bin Abdulmohsen Al-Fadli, Minister of Environment, Water and Agriculture in Saudi Arabia and chairman of the board of directors of SWPC, signed a 25-year water purchase agreement for the new Shuaibah 3 IWP today with a consortium led by ACWA Power and Public Investment Fund (PIF)-owned Badeel, at a value of approximately SAR 3 billion.
The ACWA Power – Badel consortium will lead the implementation of the project while SWPC will serve as the offtaker.
Upon completion of the project, Shuaibah 3 IWP will produce 600,000 cubic metres of water a day, catering to the water demand of Jeddah and Makkah al-Mukarramah, especially during peak demand periods such as the Holy Month of Ramadan and the Hajj seasons.