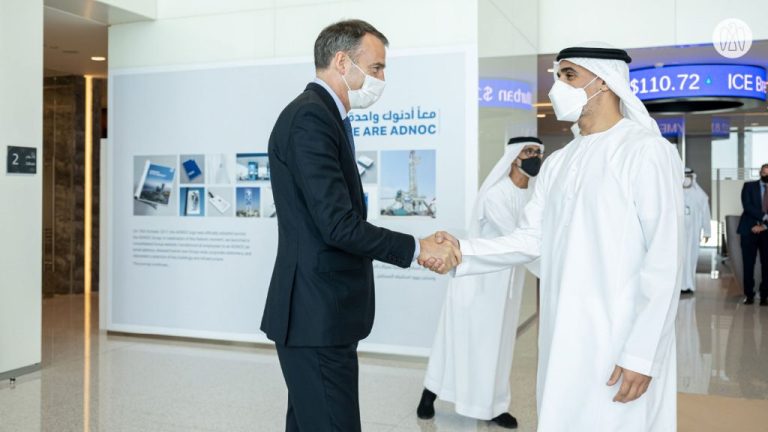 bp is strengthening its strategic partnership with ADNOC and Masdar of Abu Dhabi bringing international participation to its planned blue and green hydrogen developments in Teesside, UK.
ADNOC – the UAE’s largest energy company – will take a 25% stake in the design stage of bp’s blue hydrogen project, H2Teesside.
This will be ADNOC’s first investment in the UK. bp and ADNOC will now advance the project, initially to the next stage of design, the pre-FEED stage.
H2Teesside is expected to kickstart the UK’s hydrogen economy at scale with the development of two 500MW hydrogen production units by 2030. The project is targeting start of operations in 2027.
Masdar – the Abu Dhabi renewable energy company – has also signed a memorandum of understanding to acquire a stake in bp’s proposed green hydrogen project, HyGreen Teesside. This project is planned to produce 60MWe (megawatt electrical input) of hydrogen at start-up in 2025, increasing to up to 500MWe by 2030.
Together, these two projects could deliver 15% of the UK Government’s recently expanded 10GW target for hydrogen production in 2030.
bp will also join ADNOC to evaluate a new blue hydrogen project in Abu Dhabi, conducting a joint feasibility study for a world-scale, low-carbon hydrogen project in the country. In addition, ADNOC, bp and Masdar have joined with Abu Dhabi Waste Management Centre (Tadweer) and Etihad Airways to explore production of sustainable aviation fuels, from hydrogen and municipal waste gasification, in the UAE.
Bernard Looney, bp’s chief executive said: “By joining forces with ADNOC and Masdar we are reinforcing the world-leading role that Teesside, and the UK more widely, can play in developing new supplies of energy, as well as new skills and supply chains. We’re backing Britain and the resources, capability and net-zero ambition here in the UK make it ideal for the development of low carbon hydrogen - and together we can help deliver a significant contribution to the UK’s newly increased hydrogen ambition.”
Sultan Ahmed Al Jaber, UAE Minister of Industry and Advanced Technology, ADNOC managing director and group CEO, and Masdar chairman, said: “ADNOC and Masdar’s deepened partnership with bp is a testament to the UAE and UK’s longstanding track record of bilateral partnership in sustainability as well as the UAE’s intent to play a leading role in the fast-growing clean hydrogen economy both domestically and internationally.”